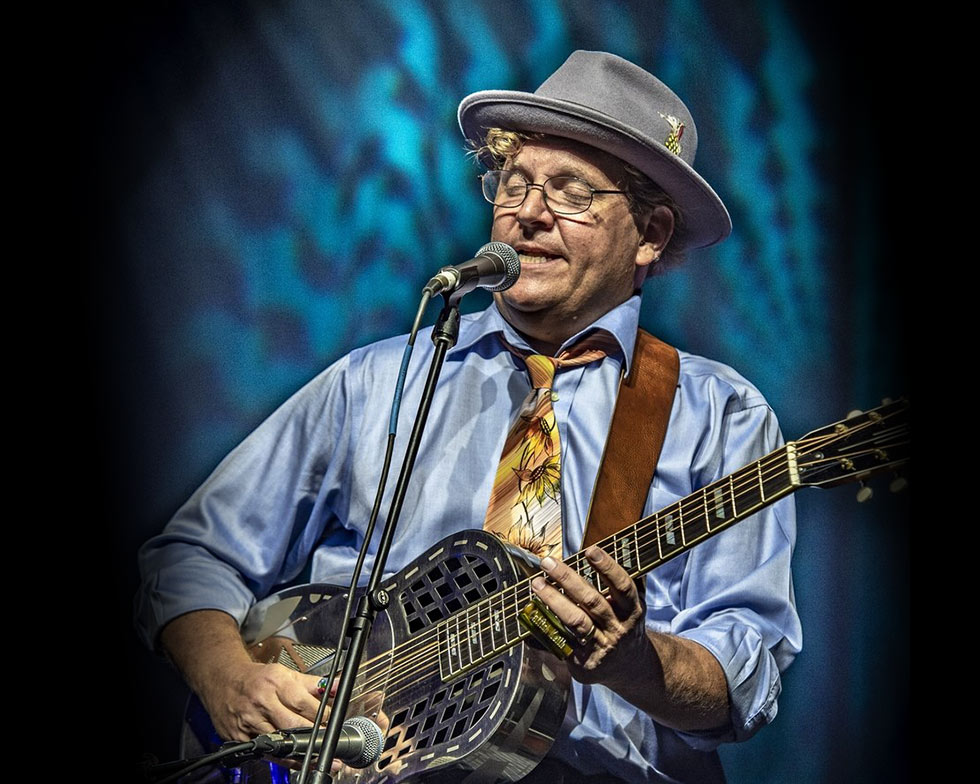 We are incredibly proud to be working with and planning tour dates for our all-time favourite blues man, Catfish Keith.

In an incredible career that (in 2022) will span thirty years, he has toured Europe/UK fifty times, built a huge following of admirers and performed alongside many of the best names in the business, including Ray Charles, John Le Hooker and Robert Cray.

Led Zep frontman, Robert Plant is such a big fan that he invited him to open the show on every one of the American and European tour dates he had planned in 2020 …until the pandemic came along and spoiled the party.

A masterclass performer, and true bottleneck/guitar/blues legend, the award-winning three-times Grammy-nominated performer is frequently praised for his “breathtaking” stage style.

When he appears on stage, the performance is so big, bold and expressive, you might be forgiven for imagining there’s a full band up there with him.
Right now, his twentieth album is currently being raved about in all the right quarters, picking up tons of radio exposure and great reviews.

An unstoppable force, the engine room that drives all he does has never been in better shape. 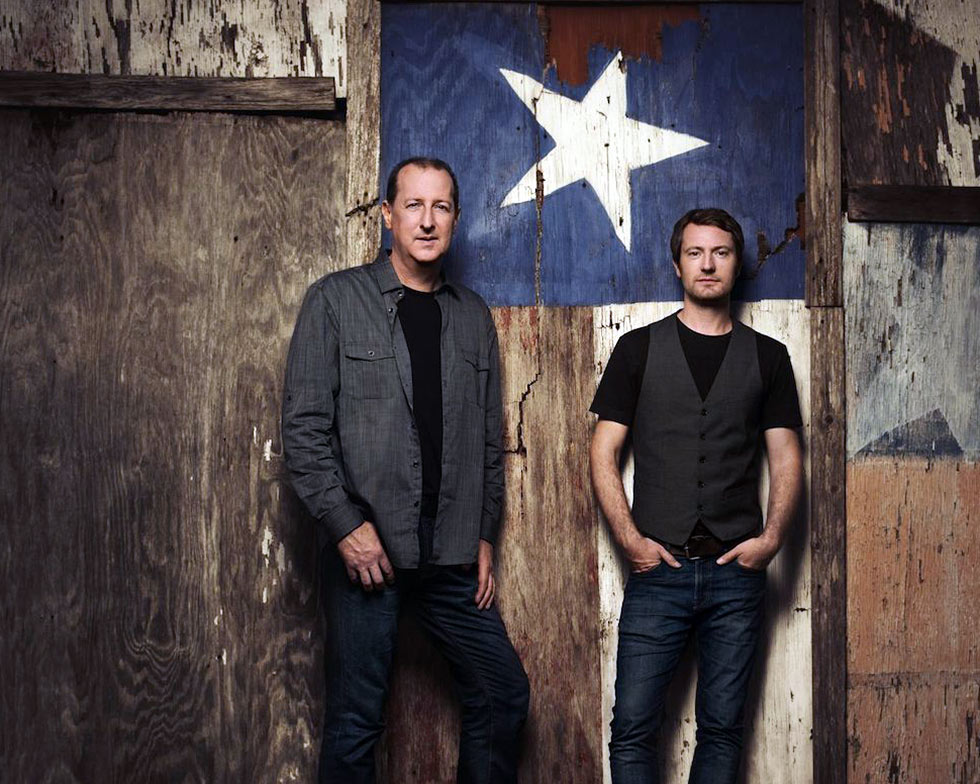 Steve Crawford’s song-writing has featured on numerous albums over the years including (with founding members of Old Blind Dogs) in the band Catford, and more recently with Ballad of Crows who won praise from legendary folk hero Mike Harding for making “really great music”.

Based in Germany for a number of years, the Aberdonian also established himself on the folk scene there and won a Best Folk Album nomination in the prestigious German Critics Award.

Spider MacKenzie is widely regarded as one of the industry’s finest harmonica players and firmly established as the go-to session player for many other musicians on both sides of the Atlantic. Since releasing their first album ‘5am’ in 2008 to great reviews the duo have gigged extensively, completing their first US tour in 2018.

Their most recent album, Celticana, was recorded in Austin, Texas. On its release in 2020, it won them a huge amount of radio exposure. Reviewers loved its strong melodies, lyrics and pace. AmericanaUK said they were “an act worth making an effort to see,” while Folk Radio UK found “echoes of The Beatles.” Folking.com said it was “a real treat.” 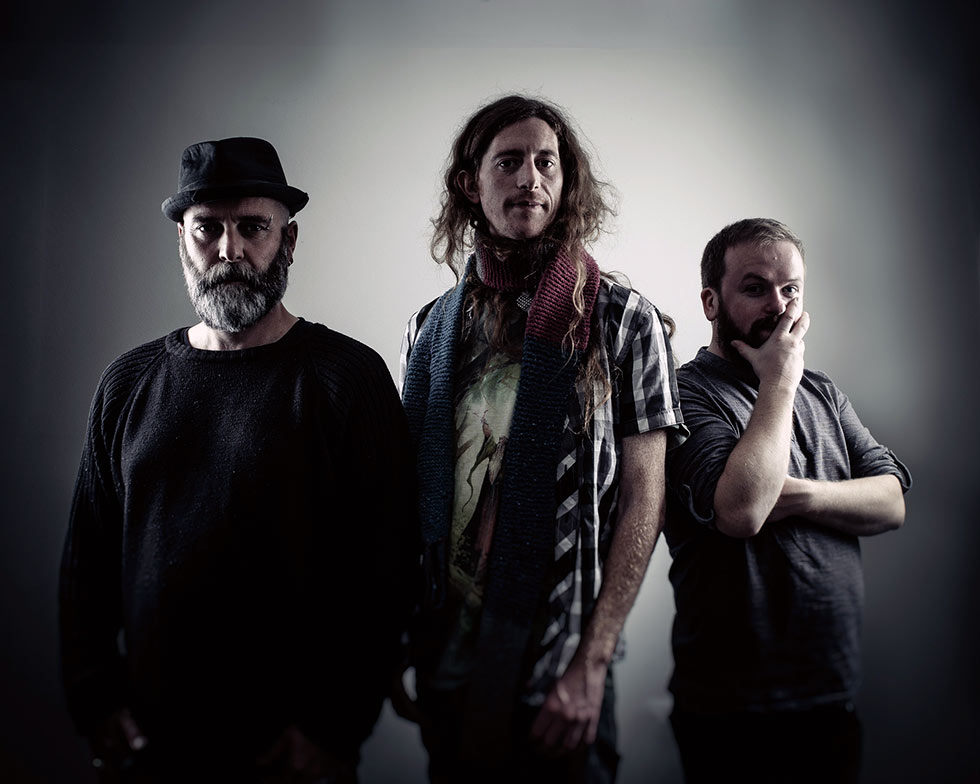 Since issuing their superb Songs of The Hollow album in 2017, Cua have gone on to become a band that has gathered in more praise than most from all the best sections of the media.

Reviewing them at AmericanaUK, top writer Jeremy Searle said: “This Irish trio stands right at the forefront of contemporary cutting-edge folk and even that description sells it a little short.”

Issuing a similar judgement for Acoustic magazine, Julian Piper had this to say: “At its finest, music should confound and amaze the listener, and this trio from Ireland have the luck – and the ability – to be one of those outfits who can pull this off.”

Folkwords said, rightly:  “Unlike anything else.”

They caused a sensation when they attracted a capacity crowd to their Celtic Connections show in Glasgow, just before the pandemic struck. It was the first event on the entire programme to become sold-out.

If any confirmation of their popularity was needed, that came in 2021 when they issued a promo video that featured the track, Kings and Queens from their debut album. In the space of five days, it had been viewed more than ten thousand times.

Folk Radio UK said: “If cua are not on your radar, then they should be.” 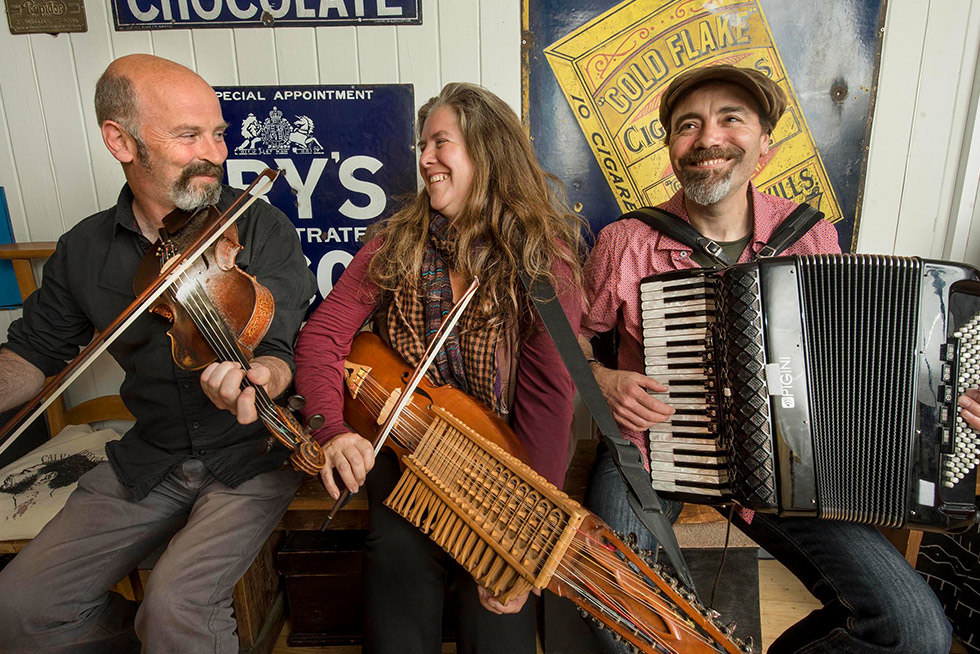 Were there ever three musicians better placed to perform the full broad and colourful sweep of European Folk Music?

We don’t think so!

As it’s something that appeals in the same way to each of them, Firelight Trio are able to stoke the inner glow as they lead you on an exhilarating journey, and trip the light fantastic in a dance of nations from Scotland’s glens and isles to France’s majestic countryside, through the glorious Balkan heritage, and Scandinavian Polska tradition, to top it all off in great spirit spicing up the musical smorgasbord with lashings of irresistible klezmer.

If multi-instrumentalist RUTH MORRIS isn’t on playing duties with various different outfits, it’s likely you’ll find her lingering in the wings as a musician on set at a big TV drama production. Most recent work includes the HBO series ‘Outlander’, and playing nyckelharpa on the soundtrack of the Netflix film ‘Outlaw King’. Partner of respected fiddler and creative force Gavin Marwick (see below) she is also a member of his Journeyman Project, Bellevue Rendezvous, The Galloway Agreement and her own ceilidh band, Whirligig. She has toured extensively.

GAVIN MARWICK is as busy as any musician could ever hope to be, and has performed around the world. As well as appearing with many different bands over the years, including those mentioned above, he has also played with Iron Horse, Cantrip, Up In The Air and Ceilidh Minogue. Session work included stints with The Unusual Suspects, Session A9, Wolfstone, Shooglenifty, Arz Nevez (BRZ), Malinky and Sogdiana (UZB) among others. A prolific composer, he has self-published some 200 of his tunes in a collection called ‘Horizons.’

PHIL ALEXANDER is perhaps best known as leader of Scotland’s top world-folk outfit, Moishe’s Bagel, and has collaborated with an impressive list of musicians including the jazz tango trio Tangalgo, McFall’s Chamber, harpist Catriona McKay, folksingers Norma Waterson, Martin Carthy and their daughter Eliza, and many more. He was a central part of the internationally-acclaimed Salsa Celtica, and has written a book about klezmer music in Berlin (Oxford University Press, 2021), which Songlines magazine described as “vivid and fascinating.” 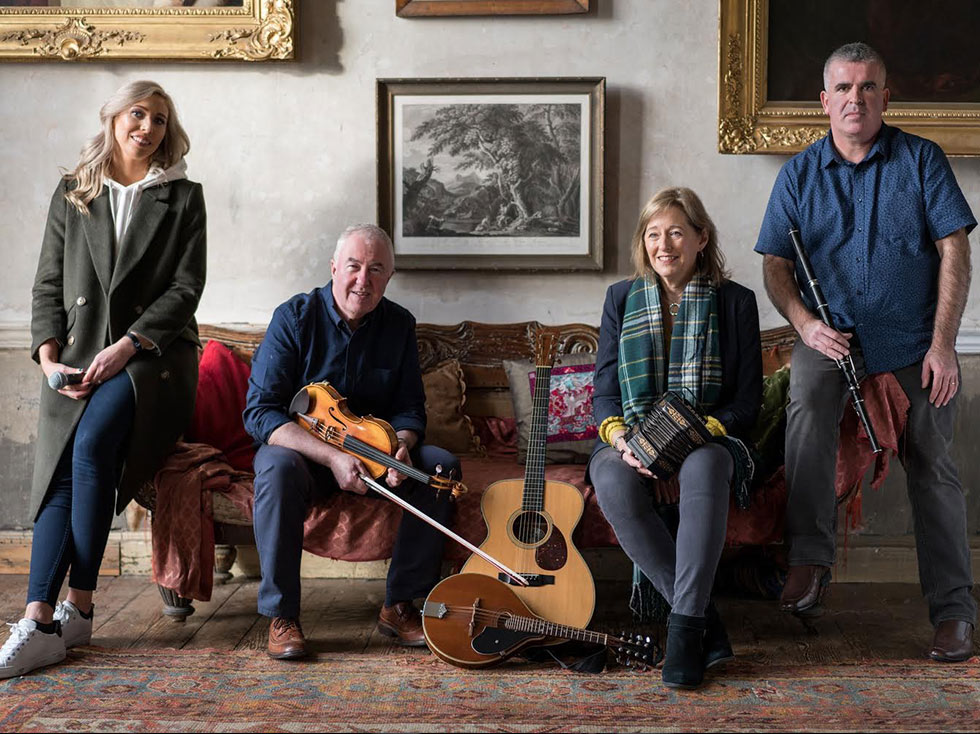 Roscommon-based band Gatehouse are unashamedly trad and proud to present the music that has been the very heartbeat of the Connacht province of western Ireland, for generations.

Where much of the country’s modern musical output tends these days to focus on edgier or left-of-centre styles, and more emphasis placed on speed and dexterity, here, we find four kindred spirits all with one common purpose – keeping the old-school approach ticking over nicely.

They tap into a rich stream, and the approach provides a much-needed “comfort” that many of the better-known figures of the genre find appealing, such as that great guardian of the Donegal tradition, Mairéad Ní Mhaonaigh, of Altan, who describes their playing as “music that lifts the spirit.”

Irish Music Magazine said: “Individually, these musicians are superb but when they combine as Gatehouse, they are outstanding!”

The Irish Times agreed too, complimenting their “maturity and depth.”

The set is always a lively affair, well constructed with an equal share of songs and instrumentals. You’ll often hear folks commenting that it reminds them of those brilliant and abiding memories of The Bothy Band in full flight. 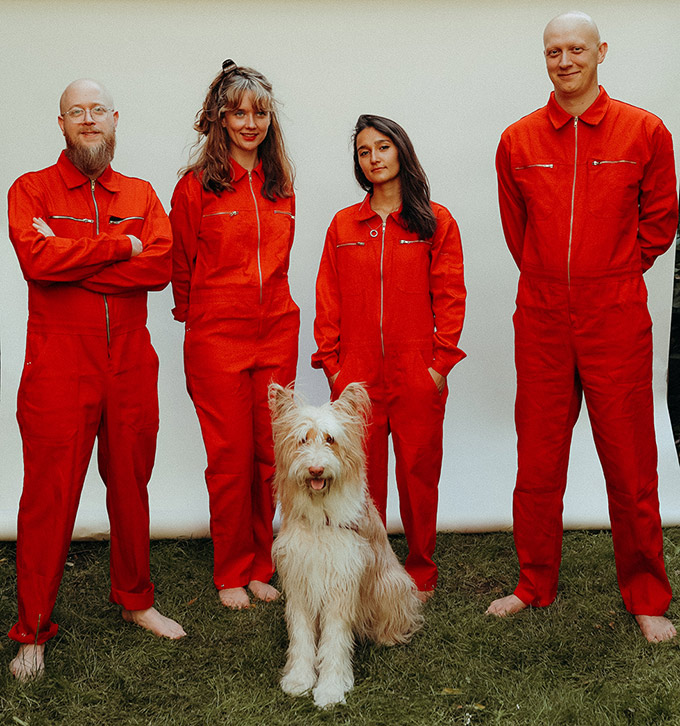 When hot Paris-based all-girl trio, Fierce Flowers, issued their Mirador album in 2020, it stimulated a frenzy of media interest that resulted in a huge amount of exposure in the UK.

Universally well reviewed it won tons of radio attention too, BBC presenter, Cerys Matthews declaring herself a fan and booking the band for her own festival in North East Wales. A major UK tour was planned, with every single date taken. Then the pandemic swept in to spoil the party.

Julia Zech’s vocals had featured strongly and she had written a large number of the album’s killer tracks, while keeping her options open too, having teamed up with Cologne-based kindred spirit Pierce Black, with whom she had also written and performed to considerable acclaim. That outfit is Stereo Naked, and they have a new 2021-released album that it seems everyone is stalking about.

There was much gnashing of teeth when Fierce Flowers failed to survive the lockdown blues. A split meant that the girls each chose to go their own way. And Julia, of course, already had another red hot iron in the fire.

While dazzling with a similar style that’s influenced by the finest American roots, especially old-time, just as great bands such as Elephant Revival and Lake Street Dive add pop stylings and sharp writing to the mix, Stereo Naked tickle tastebuds that others fail to reach.

SOME ARTISTS WE’VE PROMOTED SINCE 2005